Everyone with an interest in Social Media is abuzz following the announcement on Monday, that Facebook began testing a new feature called ‘Collections’, which allows marketers to add ‘Want’ or ‘Collect’ buttons to news feed posts about products. Facebook has stated that the new feature is unrelated to Pinterest, but we can’t help but notice the similarity… you be the judge? 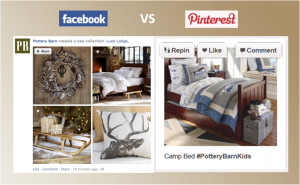 These buttons allow you to add products to a ‘Wishlist’ on user profiles which also host a ‘Buy’ button, thereby providing the opportunity to make purchases offsite. This will surely give Facebook a step up on Pinterest who do not have this functionality yet – making this feature very attractive to retailers and eCommerce marketers.

One downfall however is the fact that ‘Collections’ posts will only be visible to Fans (i.e. people who have already liked your Page), which means that it will be vital for business pages to build up their Fan base in order to use the new feature effectively – getting Fans to collect, share, and click through to their product pages.

Let’s face it. It’s in our nature to collect ‘things’. Where the ability to curate elements in Facebook has been absent thus far, this new ‘collections’ feature may just elevate Facebook’s already towering status, to an even more well rounded offering.

I, for one, believe that this is one of the boldest strides that the company has come up with in a long time. And who knows, this might just be the big ticket item that Facebook was hoping for following their recent IPO to garner greater interest from advertisers.

Sorry, the comment form is closed at this time.

See the Digital Hub in Action!

Tell us a bit about yourself and a Hub Specialist

will reach out to you.

See the Digital Hub in Action!

Tell us a bit about yourself and a Hub Specialist

will reach out to you.